The board of directors of the Eugene and Agnes E. Meyer Foundation has elected Rajiv Vinnakota, executive vice president for youth and engagement programs at the Aspen Institute, to a three-year term on the Foundation’s board.

Prior to joining the Aspen Institute, Mr. Vinnakota co-founded the SEED Foundation with Eric Adler in 1997 and subsequently served as its CEO. SEED was founded on the belief that children in an urban environment could benefit from a public, boarding educational program. In 1998, The SEED School of Washington, DC, opened to a class of 40 seventh-graders. In 2001, the school moved to its permanent campus in Ward 7, an area of the city with high concentrations of poverty. By 2004, the school was at full capacity and graduated its first class of seniors, all of whom were accepted to college. A second SEED School, in Baltimore, opened in 2008, and a third in Miami, opened in 2014. As a result of their work with the SEED Foundation, Mr. Vinnakota and Mr. Adler were named Washingtonians of the Year by Washingtonian magazine, and received the Manhattan Institute’s Social Entrepreneurship Award and Oprah Winfrey’s “Use Your Life” Award.

At the Aspen Institute, a leading national educational and policy studies organization, Mr. Vinnakota oversees the organization’s efforts to engage youth participation and leadership in tackling current issues by leveraging Aspen’s leadership development model to foster youth leaders from underserved rural and urban communities. Ultimately, the division will educate and develop citizen-leaders who mirror our nation’s diversity and will identify, nurture, and celebrate local youth and their ideas to improve our communities.

Mr. Vinnakota is an active alumnus of his alma mater, Princeton University, having served as a trustee, executive committee member, national chair of its annual giving committee, and executive committee member for its Aspire capital campaign. In 2009, he received the Woodrow Wilson Award, the highest honor that Princeton bestows on an undergraduate alumnus. Mr. Vinnakota is an Echoing Green fellow and an Ashoka fellow.

“Raj Vinnakota shares the Meyer Foundation’s commitment to solutions that address educational inequity and increase opportunity for young people whose families are economically vulnerable,” says Joshua B. Bernstein, chair of the Meyer Foundation’s board of directors. “His national perspective in his current work, and his experience in both running a nonprofit and serving as a board member will bring many valuable perspectives to our board’s work as we implement our ambitious strategic plan.”

Founded in 1945, the Meyer Foundation is one of the oldest and largest private grantmaking foundations focused on supporting nonprofits in the DC region. 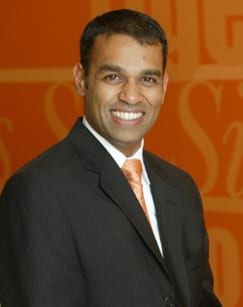