The Meyer Foundation is excited to announce the appointment of the newest members to the Foundation’s board of directors, as well as the newly elected executive committee, effective January 1: Angie Reese-Hawkins, CEO of YMCA of Metropolitan Washington; Harold Pettigrew, Jr., CEO of Wacif; Jeff Capizzano, founder and president of The Policy Equity Group; and Layli Miller-Muro, principal at Miller-Muro Consulting and founder of the Tahirih Justice Center. Read on to learn more about our newest board members and executive committee updates.

Angie Reese-Hawkins is the president and CEO of YMCA of Metropolitan Washington, which aims to foster the spiritual, mental, and physical development of individuals, families, and communities according to the ideals of inclusiveness, equality, and mutual respect for all. Reese-Hawkins has spent 35 years with the YMCA, joining the National Capital Branch in 1986 as the executive director of membership and becoming YMCA of Metropolitan Washington’s first Black woman to hold the position of president and CEO in 2000. In her role, Reese-Hawkins manages DC, Maryland, and Virginia’s YMCA branches and program centers, driving growth, community partnerships, and strategy. Notably, under her leadership, the Anthony Bowen YMCA in DC’s Shaw community underwent a multimillion-dollar renovation effort to restore the legacy of the nation’s first Black YMCA chapter.

Angie Reese-Hawkins will begin a three-year board term on the Meyer Foundation board of directors on January 1.

Harold Pettigrew, Jr. is the CEO of Wacif, one of the Washington area’s leading community development financial institutions whose mission is to increase equity and economic opportunity in underserved communities in the Washington, DC area by investing knowledge, social, and financial capital in low- and moderate-income entrepreneurs. Pettigrew has 20 years of experience in small business development, venture capital investing, transportation and transit, workforce development, and public sector management. Prior to Wacif, Pettigrew served as the director of entrepreneurship at Prosperity Now, where he led the organization’s national efforts to advance policies and programs that increase business success for low-and moderate-income microbusiness owners throughout the United States. He has also served as an advisor to the World Bank on the private sector, small business development, and business licensing strategies in Somaliland and Greater Somalia, and as an advisor to the National League of Cities advising cities across the country on equitable development strategies.

Harold Pettigrew will begin a two-year board term on the Meyer Foundation board of directors on January 1.

Jeff Capizzano is the founder and president of The Policy Equity Group, a consultancy focused on building the capacity of socially conscious organizations that are dedicated to improving the lives of young children and their families. Previously, Capizzano served as Senior Policy Advisor for Early Childhood Development and Education at the Administration for Children and Families in the U.S. Department of Health and Human Services, where he helped administer over $16 billion in programs by providing policy guidance to the Office of Head Start and the Office of Child Care. Mr. Capizzano’s focus on child development began with his tenure at the Urban Institute, where he researched the implications of welfare reform on young children.

Jeff Capizzano will begin a three-year board term on the Meyer Foundation board of directors on January 1.

Layli Miller-Muro is a social impact advisor, consultant, and strategist, working with purpose-driven leaders and organizations to refine their intentions, operationalize their values, develop their environmental, social, and governance (ESG) priorities, execute their philanthropic efforts, and create long-lasting, transformative impact. Previously, Miller-Muro served as CEO of the Tahirih Justice Center– the national nonprofit she founded in 1997 that has served over 30,000 immigrant survivors fleeing gender-based violence. As an attorney, Miller-Muro also practiced international litigation, maintained a pro bono practice, and served as an attorney-advisor at the U.S. Department of Justice, Board of Immigration Appeals. In 2010, she was honored with the Meyer Foundation’s Exponent Award for her work with the Tahirih Justice Center.

Layli Miller-Muro will begin a three-year board term on the Meyer Foundation board of directors on January 1.

The Meyer Foundation board of directors has also elected a new slate of board officers: Tram Nguyen, co-executive director of New Virginia Majority, as board chair; Winell Belfonte, CPA and partner at CohnReznick, as vice chair; Ryan Young, chief operating and financial officer at Community Change, as secretary; and Karen Wawrzaszek, regional president of BNY Mellon Wealth Management, as treasurer. Young and Wawrzaszek were additionally re-elected to their second three-year term on the board of directors.

We extend our gratitude to Bo Menkiti, founder and CEO of The Menkiti Group, who has completed his term as board chair. Menkiti led the Foundation through its 2021 executive search and subsequent leadership transition earlier this year.

And following 10 years of distinguished board service, Girl Scout Council of the Nation’s Capital CEO Lidia Soto-Harmon departs the board of directors. Her time on the board included service on the executive committee as secretary, as well as a key role in guiding the Foundation on its path toward advancing racial equity and racial justice in the Greater Washington region. 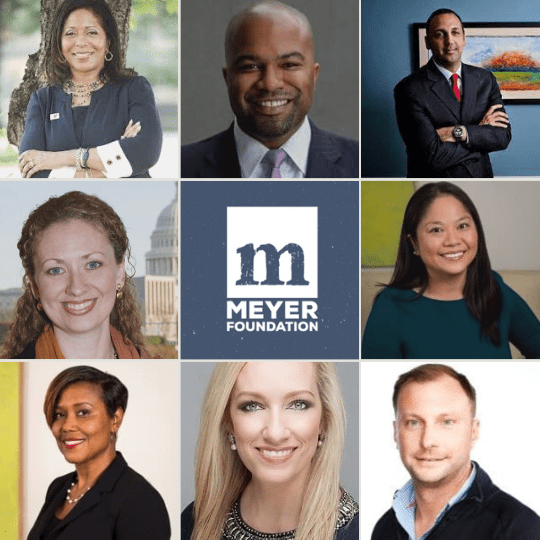