In keeping with Meyer’s tradition of strong board leadership, and building upon our nearly 75-year history, I’m excited to announce that our board has elected James J. Sandman as board chair and Charlene M. Dukes as vice chair. As we look ahead at this important moment in time to the next phases of our work with the restatement of our strategic plan, I look forward to their leadership. – Nicky Goren, President and CEO

The board of the Eugene and Agnes E. Meyer Foundation, a private foundation in Washington, DC, elected James J. Sandman as chair and Charlene M. Dukes as vice-chair of the board at its June 5 meeting.

Mr. Sandman has served since 2011 as president of the Legal Services Corporation (LSC) – the single-largest funder of civil legal aid for low-income people in the United States. His legal career spans decades, beginning with his position practicing law with Arnold & Porter from 1977 to 2007, and his position as Arnold & Porter’s managing partner from 1995 to 2005. He has also served as a past president of the District of Columbia Bar and as general counsel for District of Columbia Public Schools. His extensive legal career and personal journey were recently profiled in the Harvard Law School Center on the Legal Profession digital publication, The Practice.

Mr. Sandman has served on the Meyer board since 2007, and most recently served as vice chair and chair of the audit committee. In addition to his position on the Meyer board, he serves as the chair of the District of Columbia Circuit Judicial Conference Committee on Pro Bono Legal Services; chairman of the board of the DC Campaign to Prevent Teen Pregnancy; vice chairman of Washington Performing Arts; and serves on the boards of Tahirih Justice Center, Albany Law School, and the College of Saint Rose.

Jim succeeds Deborah Ratner Salzberg, president of Forest City Washington, Inc. and a director of Forest City Realty Trust, a national real estate firm, who served as the Meyer board chair since 2016. Under her leadership, the Foundation began to fully implement its 2015 strategic plan, including applying a racial equity lens into all aspects of its work – from programs to operations – with the vision of an inclusive Greater Washington community in which systemic racism and its consequences no longer exist. She will remain on the board for one year before her term ends.

Dr. Charlene M. Dukes will partner with Jim Sandman in the role of vice chair. Dr. Dukes has served on the Meyer board since 2015. She is the first woman president of Prince George’s Community College, which serves 40,000 students with more than 200 degree, workforce development, and continuing education programs.

She has served in numerous leadership positions in government, business, and the nonprofit sector, and on the boards of the Prince George’s County Chamber of Commerce; the Harlem Renaissance Foundation; and the Community Foundation for the National Capital Region.

Dr. Dukes has been recognized by Washingtonian magazine as one of the most powerful women in the DC region, and as one of the 2016 Washingtonians of the Year. She was inducted into the Maryland Women’s Hall of Fame in 2013, and was included in the Washington Business Journal‘s Power 100 in 2014.

At the June 5 meeting, the board also re-elected Lidia Soto-Harmon, CEO of the Girl Scout Council of the Nation’s Capital as secretary, and elected Bo Menkiti, founder and CEO of The Menkiti Group as treasurer.

“Jim shares Meyer’s commitment to advancing equity and brings his perspective from the local public education space, as well as a national grantmaking organization, to our work,” says Meyer Foundation President and CEO Nicky Goren.  “Debby’s business acumen and desire to see social change in the Greater Washington region took the Foundation to new heights. We are thankful for her leadership and guidance during her time as chair. I am confident that Jim will continue to propel the Foundation forward, along with the thoughtful leadership of Charlene, Lidia, and Bo, and the entire board.”

Established in 1944 by Eugene Meyer, an owner and publisher of The Washington Post, and his wife, the author and social activist Agnes E. Meyer, the Meyer Foundation is one of the Washington area’s oldest and largest locally-focused philanthropies. The Foundation’s mission is to pursue and invest in solutions that build an equitable Greater Washington community in which economically disadvantaged people thrive. 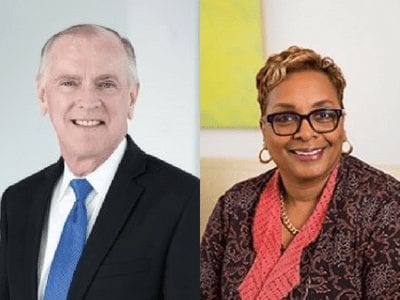