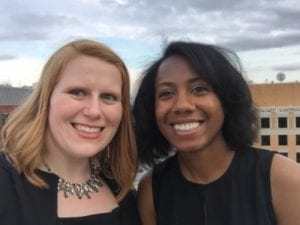 A Note from Maegan Scott:

This past weekend, we woke up to images from a white nationalist rally in Charlottesville, Virginia, and later in the day, we saw images of a driver intentionally driving his car into a crowd of counter-protestors, killing Heather Heyer. The images we saw were sickeningly similar to those from the Civil Rights era, as racists taunted, intimidated, and terrorized those marching for equality.

Still, in attempts to condemn the actions of white nationalists, many expressed utter disbelief and proclaimed that the terror we witnessed is not representative of the America they know. The outrage at the events of last weekend is welcomed and necessary. However, the blindness—whether intentional or not—to the reality that these events are not new or unprecedented (or the belief that somehow this violence went away in 1965), is deeply problematic. To speak as though this violence is new is harmful and, to many people of color, frustrating and exhausting. The racism and horror on display last weekend have long been present in many forms. And, quite frankly, many people of color are tired. I am tired. I am suffering from the fatigue of managing the bewilderment of many of my white friends and allies.

To be clear, I love my white allies. And it’s important that we understand and acknowledge that many emotions are brought to surface for all of us when reflecting on the weekend’s events— it was a shock to the system (double entendre intended). But disbelief shouldn’t be one of them. Now, as in the past, it is crucial that our white allies go beyond condemning racism, to calling it out and confronting it.

Earlier this week, I had a profound conversation with Melody Fitzgerald, executive assistant to our president and CEO. During that conversation, she spoke about her personal connections to Charlottesville—her sadness, anger, and also hopefulness. During our conversation, she was candid about reckoning with the Commonwealth’s past. She’s calling on her fellow white allies to do more. I believe it is a message that needs to be shared widely.

So, I asked her to write about it, and she did.

A Reflection from Melody Fitzgerald

Like many people across the country this past weekend, I watched horrified as domestic terrorists marched through the streets of Charlottesville, Virginia. To many, Charlottesville may seem like a distant location or a remote college town, but to me, it’s my other home.

My husband grew up in Charlottesville and his job is based there. I have family and friends who live there and I visit often. So as pictures and videos of white supremacists and neo-Nazis marching through the streets of my beloved city crossed my social media feeds, I couldn’t help but feel sorrowful and ashamed. While many of the weekend’s marchers were not from Virginia, their message could be found clearly in Virginia’s past, and right there in the history that the monuments were there, in part, to preserve.

As a native Virginian, I wish I could say that I came to grips with my commonwealth’s racist past as I was growing up, but like many others, my white-privilege shielded me from it. I didn’t have to come to grips with it because it seemed to be a thing of the past—or so I thought.

It wasn’t until later in life that I realized my state was frequently on the wrong side of justice. Virginia fought school desegregation for years after the decision in Brown v. the Board of Education (1954) and fought against marriage equality in Loving v. Virginia (1967). Representatives at Virginia’s Constitutional Convention in 1901-1902 actively worked “to eliminate every Negro voter who can be gotten rid of, legally, without materially impairing the numerical strength of the white electorate,” which led to the state’s disenfranchisement of felons (primarily African Americans) and is still heavily debated as part of the state constitution today.

So when I heard that Charlottesville was planning to remove its monument to Robert E. Lee and the Confederacy from Emancipation Park (formerly Lee Park), I was thrilled. “My second home is moving into the 21st century and confronting at least part of its racist past,” I thought. But the violence from last weekend is intended to do the opposite—to drag the country backwards. That’s why it is important now to not just stand for racial justice, but to name and actively oppose white supremacy.

And you can start now: Call out relatives at the dinner table for racist remarks; listen without interruption to colleagues and friends when they share their lived experiences, and refrain from reaching for comparisons or asking them to hold space for you and your feelings; read diverse stories and news outlets; brush up on racial equity terminology; talk to your kids; then, think even more about what else you could be doing in your life or through your work to show up, not just as an ally, but a good ally.

It is well past time for white people to come to grips with our racist past and to stand in opposition to any message, person, or system that promotes the supremacy of whites. The avoidance of our racist past is our sin and our deepest shame. We need to confront it because it is the only path forward.