Two years ago, the leaders of Academy of Hope in Edgewood Terrace looked at how they could better prepare their adult students for a changing workforce, not to mention an entirely new GED test that’s coming in January.

In order to replace volunteers with trained teachers and continue its work toward literacy alongside workforce training, the nonprofit realized it would have to double its more than $1 million budget.

“Absent of some lottery win or a connection to some very wealthy people, we just weren’t going to get there quick enough,” said Lecester Johnson, executive director of the Academy.

The nonprofit is one of several in the District that uses education coupled with services to boost residents out of poverty. And when it comes to educating adults toward a GED, secondary education and careers that pay a living wage — all while helping with childcare or English proficiency — a handful of D.C. nonprofits have found the traditional fundraising model just doesn’t cut it.

In response, some of them are transitioning to a new model, operating adult charter schools that provide financial stability while allowing them to continue to raise funds for auxiliary services that improve student success.

The D.C. Public Charter School Board recently approved Academy of Hope as the seventh adult charter school in the District, which will launch in the fall of 2014. The board is one of a few in the country that approves adult charters, which serve students ages 16 and up.

Charter schools receive public funds but are operated independently of the District school system. They have more autonomy in designing their curriculum and budgets in exchange for additional oversight by the board.

Without the charter, Johnson said her nonprofit has less than $3,000 per pupil to bring a student from about a sixth-grade reading level up to a GED or high school equivalent — and then launch them into the workforce.

Accountability
With that funding comes more accountability, says Allison Kokkoros, chief academic officer for the Carlos Rosario International Public Charter School. The school was the first adult-focused charter in the nation when it transitioned from a nonprofit model in 1998. Since its original start in 1970, Carlos Rosario has operated as a D.C. public school, a grant-funded nonprofit and, now, a charter school.

“It really is different from what we experienced as a nonprofit,” Kokkoros says, adding that nonprofits making the transition should come into the process with “eyes wide open about the expectations.”

As a charter school, Carlos Rosario’s funding is tied to enrollment levels–Kokkoros says this can be tricky when working with students who aren’t required to be there–and seemingly everything is audited. Kokkoros says the school had to establish a new registration department to ensure that its nearly 2,000 students are all District residents.

But she says the oversight and stability that comes with the charter funding is “critically important” for the mission of their work, especially when it comes to brokering partnerships with other universities, nonprofits — and the bank.

Carlos Rosario recently completed a new workforce development campus outfitted with culinary arts kitchens to meet demands for workers in D.C.’s hospitality and retail sectors. And the school, which works primarily with adult immigrants, has a long waiting list of those who’d like to attend.

The need
It’s estimated that some 9,000 young people in the District between the ages of 16 and 24 are not on pathways to careers or continuing education, says Lori Kaplan, president and CEO of the Latin American Youth Center.

LAYC focuses on students as young as 16 who’ve been disconnected from the workforce, often by a lack of education, language barriers or social issues.

The Center has founded three charter schools and operates one of them, a career academy that just finished its first year in operation. The schools serve some 600 youths each year. They function in the context of the center’s other services, which include childcare and English as a Second Language courses, elements Kaplan says are key to students’ success.

“A job often (comes) on the backend of a variety of social issues — whether homelessness or teen pregnancy or aging out of foster care,” Kaplan says, adding that a traditional job training model doesn’t work for students “that are carrying so many challenges.”

While the Youth Center had been able to assist with many of these challenges, Kaplan said it was difficult to also bring the level of training students need to launch into a career without a more structured education system.

Students at the charter schools now can specialize in career pathways like construction, medical assistance or computer technology, gaining skills that the workforce is demanding.

Nonprofits like these are also pivoting to direct students more toward engaging careers, rather than just finding them any job.

Kaplan says sometimes adults without career skills just need to start somewhere, but the Center tries to place them with companies where they can advance into higher positions.

“Sometimes they think no one really cares about them,” Kaplan says. “If we don’t address the issues these young people are dealing with, it will carry on for a generation.”

Source:
Elevation DC
Back to News 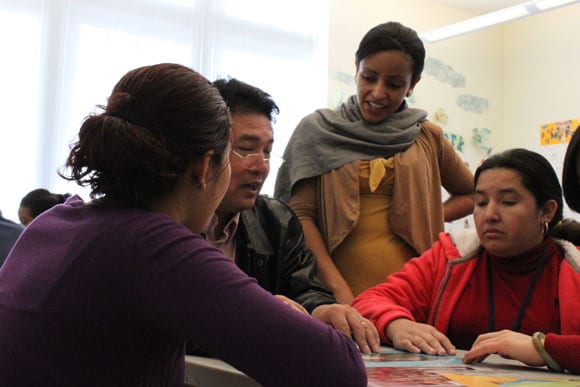