Like many other grantmakers, the Meyer Foundation has historically been leery of putting money behind efforts to help grantees raise more money.

Not that we weren’t aware of the huge need. Almost every grantee cites fundraising as a pain point, and insufficient resources as their number one challenge. But we were concerned about being overwhelmed by demand—after all, wouldn’t every grantee want to add fundraising staff if they could?

From the limited grants we did make, we frequently felt burned by expensive fundraising plans that were never implemented, or new development staff who didn’t work out. We relaxed our stance somewhat in 2004, when we began making more grants to enable organizations to hire fundraising consultants. The results were mixed.

The economic downturn of 2008 and 2009 had significant ramifications for the DC region’s funding community, creating even more challenges for small and mid-sized nonprofits. Freddie Mac and Fannie Mae were the two largest funders in our region. Under government receivership, both began a gradual exit from philanthropy.

During the downturn, we also noticed that those grantees with strong individual giving programs seemed better equipped to weather the economic storm.

Armed with that insight, in 2010 we made a bigger bet.

We launched a partnership with the Seattle-based consulting firm Benevon to help grantees implement Benevon’s very specific approach to raising money from individual donors. We encouraged grantees to consider the Benevon model, and offered up to four years of gradually decreasing grant support to offset the costs of their annual Benevon training.

Over the past six years, the 28 organizations that adopted Benevon’s approach with Meyer support have raised $7.1 million from individual donors—much of it in the form of multi-year pledges. In simple terms, that represents a tenfold return on our investment of $650,000. And that return will compound as donors continue to give in future years.

A culture of philanthropy

In the years since Meyer began its partnership with Benevon, CompassPoint and the Evelyn and Walter Haas, Jr. Fund have released new research on nonprofit fundraising capacity—a body of work that confirms and reinforces the Meyer Foundation’s experience over the past six years.

This April, the Haas, Jr. Fund, in partnership with CompassPoint and others, released two follow-up publications that delved deeper into the concepts introduced in UnderDeveloped. In the white paper Beyond Fundraising: What Does It Mean to Build a Culture of Philanthropy, author Cynthia Gibson focused on better defining what we mean by culture of philanthropy.

And in Fundraising Bright Spots, authors Jeanne Bell and Kim Klein looked at 12 organizations with unusually strong individual giving programs to find common elements and shared characteristics. Their conclusions echo and build on the findings of UnderDeveloped. For the “bright spot” organizations:

Those characteristics also describe those organizations that have been most successful implementing the Benevon approach with the Meyer Foundation’s support.

But not all the Benevon implementers have been equally successful. Of the 28 organizations that received Meyer support, more than half are either no longer using the Benevon model or are implementing it in a modified way that is producing more modest results. The feedback from many of those was that Benevon was not a good “cultural fit” for their organization.

This relatively frequent comment, combined with the CompassPoint/Haas’ Jr. studies, led us to what may seem like an obvious conclusion. For many small to mid-sized nonprofits, building fundraising capacity—and particularly the capacity to raise more money from individual donors—requires significant culture change.

We intuited this, on some levels, way back in 2010. One of the reasons we chose to work with Benevon was that the model requires a team approach—involving board members, the executive director, program staff, and volunteers. And as a result, many of the organizations did report culture shifts, such as increased ownership among board members and program staff for fundraising results.

But we viewed these changes as a benefit of this work, not its object. We believed we were helping organizations access a very specific type of technical assistance, coaching, and consulting.

If we had understood that, we might have approached the work differently in at least three specific ways.

Larger and/or multiple aligned investments. Early-on, we learned that efforts to build fundraising capacity often revealed the need for other organizational development or management assistance work—most commonly strategic planning, branding and communications, board development, and program evaluation. Providing multiple, simultaneous grants to a single organization went against a longstanding foundation policy. And though we eventually bent that rule, we did so cautiously and with reluctance. Knowing what we know now, we recognize that multiple, aligned engagements might have been more effective at producing culture change.

A longer time horizon. Our multi-year investment strategy (no more than four years of steadily declining support) may not have allowed sufficient time for culture change to take root—especially in light of inevitable changes in board and staff leadership. A five- to seven-year time frame, with steady support and ongoing engagement on our part, might have increased the likelihood of long-term success.

Greater attention to readiness. Because Meyer didn’t want to be seen as coercing organizations to adopt the Benevon approach, we played a relatively hands-off role in identifying and selecting participating organizations. When leaders said their organizations were ready, we took them at their word. Over the six years, we learned that the board and executive need to be equally committed, that board and staff leaders need to be coachable and eager for change, that building fundraising capacity needs to be a top priority for the organization, and that continuity of leadership (on both the board and staff levels) makes a huge difference. If we had applied those lenses more rigorously as we selected groups to support, we might have ended up supporting fewer organizations—but those that did participate might have been more uniformly successful at changing their cultures.

We’re proud of our work with Benevon and the significant results our grantees have achieved. Helping 28 organizations raise $7.1 million is worth celebrating, and the Meyer Foundation’s experience over the past six years shows that modest investments in building fundraising capacity can produce significant results.

We also believe that the Benevon model holds great promise in promoting the organizational culture shifts needed for nonprofits to become better at raising money from individuals, and we will continue to support organizations that want to work with Benevon.

But after six years of experience, and informed by the research commissioned by the Haas, Jr. Fund, we will approach this work differently moving forward.

We hope these lessons are useful for other grantmakers contemplating similar work, and for nonprofits that want to raise more money from individuals. Strategy and tactics do matter, but perhaps not as much as culture.

Rick Moyers is vice president for programs and communications at the Meyer Foundation. This post was adapted from his remarks as a panelist for the session “Helping Grantees Build Fundraising Capacity” at the Grantmakers for Effective Organizations conference on May 2, 2016 in Minneapolis. 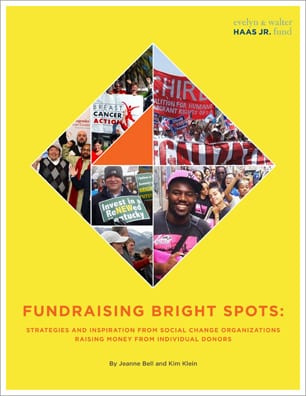